I was looking at my bench the other day and noticed that my cache of improvised tools has gotten relatively large. There are one or two that I am particularly proud of or find useful on a regular basis and I decided to post them here. 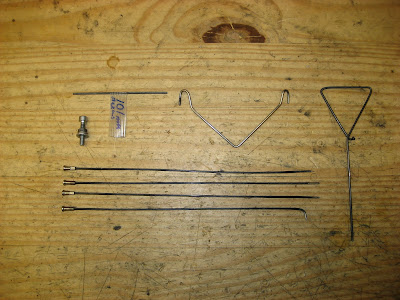 The functions of some of these are self-explanatory: the spoke pokes are used to poke, pry or scrape small parts, the nipple holder is twisted onto the back of a nipple for easier insertion into a deep rim, and the chain holder is used to remove tension from the chain when inserting a chain pin. All of these are easy tools to make out of discarded spokes.

The 101mm cable gauge is a replacement for the quite nice but somewhat expensive tool that Shimano makes for setting the cable length for its internally geared hub systems. It is not easy nor advisable to try to adjust the cable length while it is engaged on the hub, so the tool provides a way to set the center of the cable stop 101mm from the end of the housing. Suffice to say it is a tedious process to try to pull the slack out of a cable, measure 101mm end-to-center with a ruler and set the stop. The segment of spoke has been ground 96mm, which is the length of cable needed between the end of the housing and the inside edge of the stop. Setting the cable length is now just a matter of running the stop up the cable until it hits the gauge and pulling the slack through. It also conveniently doubles as a lever with which to move the cassette joint on the hub via the 2mm port provided.

The riv-nut setter is a handy but infrequently used tool: I've set three riv-nuts in two years. There are actual tools made for this purpose but if you use it slightly over once a year, and the material costs to make it yourself are none, why buy one? I feel my take is also easier to use than the equivalent commercial version.

Since their main use is as a water bottle or fender mounting point riv-nuts are of necessity threaded to take a M5 bolt. Using a longer M5, a nut and some washers gives you a quick and dirty riv-nut setter. The basic idea is to thread the nut onto the M5, grease the washers and put them on, and then thread the riv-nut on. The nut is tightened against the stack of washers, which decouple the nut from the riv-nut and allow it to be compressed without rotating.

The last tool was too big to fit into the group shot, and happens to be the best looking but least creative tool in the bunch: 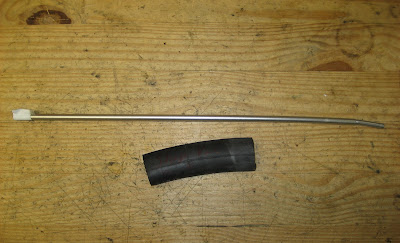 How exciting! A tent pole and a bit of tube!

The shop does tent pole repairs as well, which is a good source of free small diameter aluminum tubing. I use this one in conjunction with a shop rag to swab out seat tubes after honing. Not exciting at all.

Recently a repair on a suspension fork required replacing the seals because debris had gotten inside the air chamber and prematurely wore out the piston O-ring. To get all the dirt particles and oil out I used the tent pole as a suction straw: 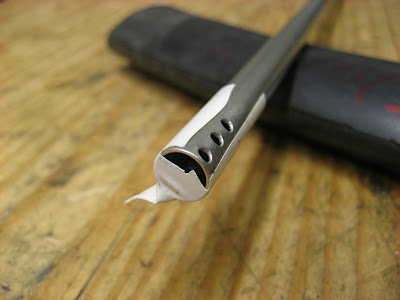 The flag of electrical tape can be used as a wiper to move material to one area, and everything is sucked up using a shop vac. The holes in the pole are slightly countersunk and the whole end deburred using a wire wheel to prevent scratching the shock. The short bit of inner tube acts as a seal between the tent pole and the shopvac hose, bringing the airflow at the tip to a good level. Half of the tip is covered to allow for cleaning the face at the bottom of the shock while ensuring airflow through the side holes.

While this did work beautifully, I am a bit more proud of the pretty good alignment and spacing on the holes I got with just an eyeball and a cordless drill.

"I make this look good."
Posted by Robert Alverson at 8:50 PM No comments:

Robert Alverson
Oakland, California, United States
If I own it odds are I've pried it open at least once to see how everything works. Fortunately, I am also adept at putting things back together.